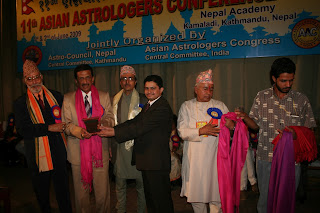 Famous Nepalese Royal Astrologer Laxmi Pati Pande ( 1758 - 1813 A.D.) in the period of Bahadur shah ( 1757-1797 A.D.) had written the tikas of Bhashwati and started his mathematics and Jyotish study. He is found to be the first Nepali astrologer that has written the Nepali meaning of his slokas. His contribution has shown that Bhashwati was the initial textbook of mathematics in Nepal then after only students of high level used to read Lilabati for more knowledge in mathematics.

Astrologers had calculated planets-stars calendar and eclipses on the basis of this Bhashwati.They taught their students making Tikas of this book. Laxmi Pati pande is known to be a great theologian in Nepal. He was honored as a royal astrologer. He was not only the mathematician but he had a nice idea about the timings of stars -planets counting. In the kingdom of Ran Bahadur Shah, he had made a solar watch. Since it was made following the classical jyotish Rules,so it had helped a lot to know the time at that time. He translated many important articles from mathematics & astrology in Nepal. We find the list of about 40 books that was either copied or written by Laxmi Pati Pande in Laxmi Pati Sangraha. Among these books, notable books are Ratnadeep, Lilabati,  Bhashwati, Tika,  Griha Laghava Kalarnav Dipika, etc.

Again on 2012, Jayanta Acharya and Ghanashyam Subedi of Nepal and Surajit hajarika of India were facilitated by the award  at International Astro and Oriental Heritage Conference in March 14th to 16th 2012 in Katmandu, Nepal.

On May 2018, At South Asian Astro & Vastu conference Dr. VishwoRanjan Mishra of India, Dr. Arjun Bhattarai, Jeevan Poudel and Ravi bhakta Baral of Nepal are facilitated by this award.

We have 29 guests and no members online