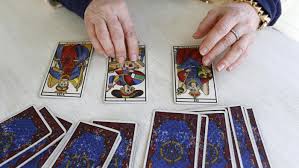 Kathmandu: Shanghai feels like a city of the future. Shimmering skyscrapers and elevated walkways abound, and on a stroll down the street it’s likely you’ll bump into people from all over the world.

Imagine my surprise then upon discovering the popularity in Shanghai of tarot reading — the centuries-old occultist practice. In a quick search on China’s consumer review website Dianping, there are dozens of shops in the city that provide this service.
Almost 1,000 customers had left online reviews for Shanghai’s highest-rated tarot shop, with some customers claiming they returned on a weekly basis to have their fortunes read.
One review that struck me was from a person saying how much tarot had helped in finding her path through life. The tone of it almost elevated the tarot reader to a godlike status, and I was reminded of how emperors in ancient China would always consult fortunetellers before making important decisions.
Having your future read isn’t cheap. The average rate is 300 yuan (almost $45) for half an hour. Most customers are there to seek help in working out their relationships, career issues, or health woes. I feel for them. It’s not easy to deal with these things, many of which are beyond our control. Any outside help is welcome.
I found myself in a similar situation. Several days after moving back to Shanghai from London, one of my papers was rejected from a top academic journal. A little disheartened, I decided to indulge in a tarot reading and see if it could help me get past my disappointment.
The first store I visited was located in one of the apartments of a residential building. Since the customer is expected to ask specific questions about happenings in the coming three months, I asked about academic publications, and she told me that some of my articles would be published and some would be rejected. This seemed like common sense to me.
Since I was single at the time, I next asked if I would meet someone within the next several months. To my surprise, she responded with a question: “Your previous romantic experience is very limited, isn’t it?”
Fortunetellers play an important role for many people, and in many ways highlight the hopes, fears, anxieties, and desires of a transforming society.
A little offended and wondering how she had reached this conclusion based on my question, I decided to throw in the towel. The consultation had ended up not bearing fruit — I actually felt worse than when I had gone in — and I doubted her abilities as a fortuneteller.
Not to be deterred, I decided to try another reader who had been recommended by my friends. Reservations had to be made a month and a half in advance, and she only received four people a day. Apparently she arranged her working times around her child’s schedule — she wouldn’t receive any customers until her daughter’s lunch had been prepared.
The reader combined the Chinese Ziping method with Western astrology. The Ziping practice was invented in the Tang dynasty and, like astrology, uses a person’s birthday to predict their future. Interestingly, her method involved performing an ancient reading of the cards and then reinterpreting what they meant in a contemporary setting. For instance, my ancient reading showed me to be a great warrior, which she interpreted as a sign that I will have a successful career.
She proceeded to do a general reading of my life and answered my questions. Unlike the majority of tarot readings that usually only forecast three to six months ahead, her method enabled her to see farther into the future.
Fortunetellers play an important role for many people, and in many ways highlight the hopes, fears, anxieties, and desires of a transforming society. In a secular China, the readers function as priests, mental health counselors, and close friends.
Times are changing. In our modern society, premarital sex is commonplace, people get married at an older age, divorce rates are on the rise, and globalization has made long-distance relationships much more common. Life is unpredictable and filled with complex relationships. Fortunetellers help give people back a sense of control over their lives.
Although people are less superstitious in 2016 than they were hundreds of years ago, marketization and advancements in technology have only increased helped the fortunetelling market. E-commerce has revolutionized the way people seek help and connect with others — people anywhere can now seek the advice of seers via Skype and online payment.
After every consultation with a fortuneteller I felt a certain level of calmness. But although it made me feel better, I ultimately wasn’t offered a real solution to my problems. Instead, the reading simply functioned as  a temporary medicine to simmer down anxious thoughts.
It’s easy to worry about the future. But no matter how stressed out we become, it’s critical not to lose sight of the present. A famous seer in London once told me that perhaps the greatest challenge in life is working out how to deal with uncertainties. I’ve never heard truer words spoken. (by Shen Yang, Sixth Tone )

We have 37 guests and no members online