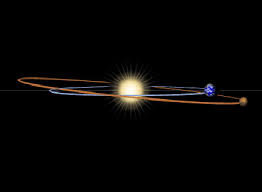 Kathmandu: The Hindu. Owing to harmful planetary movements taking place after several decades from March 9, the political class is all set to undergo severe strain across the world, according to noted astrologer and almanac writer Srinivasa Gargeya.

Addressing a press conference here on Tuesday, Mr. Gargeya said that the transition of Saturn (Sani ) and Mars ( Mangal ), both rival stars, during April 17 to July 20 would create vicious atmosphere similarly to that prevalent during Second World War igniting misunderstanding among nations.
“These 64 days is crucial as the planetary position is unfavourable.
The events occurring during this period are likely to take dangerous proportions in the next 12 months. Adding to the discomfort of the rulers, the Guru Chandala yogam (a Natal or Navamsa Chart Guru is with Rahu-Ketu axis of 180 degree, which means true nature of Jupiter get manipulated or corrupted) can be seen,” he said.
The astrologer said the unfavourable planetary movements ( vakra sancharam -retrograde movement of planets) would impact all the rulers in the world including all chief ministers, prime ministers and presidents.
“The rulers should exercise caution while taking for their unclear words might ignite severe backlash. They (rulers) should also take care of themselves as their health will be severely hit owing to stress,” he added.
Mr. Gargeya said the yagnams should be performed to ward off the evil powers,” he said, adding, “Nandanavanam Naga Trust is organising a massive yagnam from March 6 all over the State involving several acknowledged pundits and spiritual heads to reduce the malefic impact of the planetary movements. The final yagnam would be performed either at Amravati or Hyderabad.”

We have 31 guests and no members online