How to determined Woman's conjugal happiness and husband's longevity

Kathmandu: According to Nepalese Jyotish Shastra, Woman's conjugal happiness and husband's longevity are to be determined from the 8th place from the Ascendant, about the children from the 9th house, about the husband and the appearance and beauty from the 7th house, about the association and chastity from an examination of the 4th house.

The Horoscope of the New York Stock Exchange

Perhaps the most important of these is the horoscope of the New York Stock Exchange which was founded May 17, 1792. There are several times out there for this chart, with different astrologers making a case for each. After much testing, I find the 10.30 am chart to be the most accurate. I have rectified to 10.34 am in order to make better use of the smaller chart varga divisions in Jyotish. This is quite a powerful chart, although one needs to stand outside of the Vedic tradition to fully appreciate it. Uranus, the planet of unbounded energy and sudden change, rises within one degree of the ascendant while Venus, the planet of money and luxury, culminates very near the Midheaven. Venus and Uranus together spell "fast or accelerated money" better than just about any other planetary combinations I can think of and therein perfectly describe the rapid movement of money on the trading floor. However appropriate that symbolism, it is more important that the chart adequately reflect major price movements over its long history. 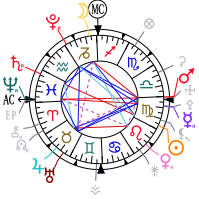 By John Mangun - AUGUST 30, 2017. If you want to make a lot of money, become an economist, particularly an academic economist who teaches. In the US you can make well above $100,000 per year. You might even get to work for the government and bump your income to seven figures.

We have 97 guests and no members online